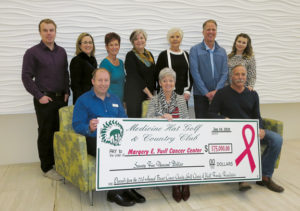 The Medicine Hat Breast Cancer Golf Classic has been raising funds for 23 years and this time the cheque was for $75,000.

Heather Bach, executive director of the Medicine Hat & District Health Foundation, says she continues to be amazed at the amount that is raised each year.

Half the money was raised through the tournament and the Yuill Family Foundation matched those funds for a total of $75,000

The golf classic is hosted by Medicine Hat Golf & Country Club. General manager Cam Jacques says the Yuill Foundation has been matching the funds raised for the last five years.

Health Lemeshuk, administrator for the Yuill Family Foundation, says the decision to match the funds was made because it is a great complement to the Margery E. Yuill Cancer Centre at Medicine Hat Regional Hospital.

Back says the money will be used to purchase vital signs monitors for the almost daily breast cancer surgery that takes place at Medicine Hat Regional Hospital. It will also be used to assist patients who need to travel to Lethbridge or Calgary for cancer treatment and need financial help to do so.

The fundraising initiative was started by Debra Cantalini-Gallant. After her passing, others stepped in to continue the tradition.

Jacques says people in the community are so keen to participate that many phone early in the year for details to include it in their calendars. In the 23-year history of the event a total of $1.1 million has already been raised.

Bob Kalista, owner of Medicine Hat’s Royal LePage Realty, says they’ve been involved from the beginning. He has family members whose lives have been touched by cancer and many realtors in the office have, too. It has made them want to support the initiative and make a difference.