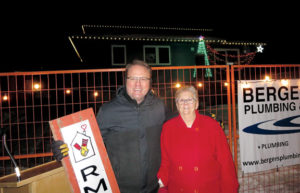 The switching on of Christmas lights at the Medicine Hat Ronald McDonald House on Thursday evening was just the first of many significant events that will be held there.

“The lights signify we are closer to the opening,” said Jason Evanson, CEO of Ronald McDonald House Charities Alberta.

Evanson talked of the community’s generosity in seeing the project take shape and that $2 million has already been raised for the first five years of operating expenses.

Standing in the group of people assembled for the occasion was the former owner of the house, Barbara King. She and her late husband Alfred, who operated King’s Barbershop on Third Street for decades, did not have children of their own. Barbara said she loved children and is so pleased that the house she once called home will be a Ronald McDonald House

She counted down from five to zero along with everyone else and then the lights came on.

Mayor Ted Clugston talked of his family’s medical background and about how often he has sat at the bedside of family members who have been ill.

Last April the project and location were announced thanks to a donation of $800,000 from the Yuill Family Foundation to cover construction costs. It is the fourth Ronald McDonald House to be built in Alberta after Edmonton, Calgary and Red Deer.

“We would not be here tonight if it was not for the generous donation from the Yuill family,” said Clugston.

The two-bedroom home with another bedroom in the basement has been transformed into a 4,100 square-foot home with six family suites plus a kitchen, dining and living room area.

The Ronald McDonald House will be a place for sick children to stay along with their family when receiving medical care and treatment at Medicine Hat Regional Hospital.

The official opening is expected to take place in March 2020.